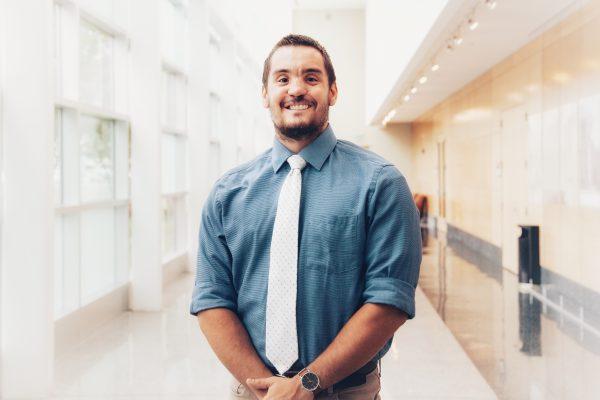 “Damon McIntire, a student in his third semester at the USF College of Nursing, had been working as a firefighter/emergency medical technician (EMT) when an accident changed the course of his life. This nearly fatal event in December 2013 landed him in the hospital for 30 days on a ventilator and led to more than a dozen reconstructive surgeries over the following years. Suddenly, the first responder was on the receiving end of emergency and critical care medicine — and began to see things from a whole new perspective.

“The people who made the biggest impact on me during my extensive recovery were nurses,” he explained. “I saw firsthand what happens to trauma victims after the first responders do their jobs.”

McIntire’s experience as a patient was an epiphany, leading him to realize that he wanted to become a nurse. After he completed his Associate of Arts degree at State College of Florida, Sarasota-Manatee, he applied to the USF College of Nursing and was accepted.

“The beginning was overwhelming at first,” he said of the nursing program, “but it was hands-on right away, and I adjusted quickly. We were all well prepared going into our clinicals.”

A native of Venice, Fla., McIntire is pleased that he was placed at Sarasota Memorial Hospital for his clinicals. Not only is it close to home, but “Sarasota Memorial is a great campus, with all the newest equipment, high standards, and passionate staff who want the best for their patients,” he said.

Over the years, McIntire has received scholarship support from the Community Foundation of Sarasota County and the Suncoast Nursing Action Coalition. He was one of the first students they supported, and on Wednesday, May 9, McIntire was recognized by these organizations for his success and progress as a nursing student. “I wouldn’t even be in college if not for organizations such as these. The medical bills that I had been trying to reduce restricted my ability to pay for tuition,” he said. …” Continue Reading: https://hscweb3.hsc.usf.edu/nursingnews/first-responder-sets-his-sights-on-nursing/ 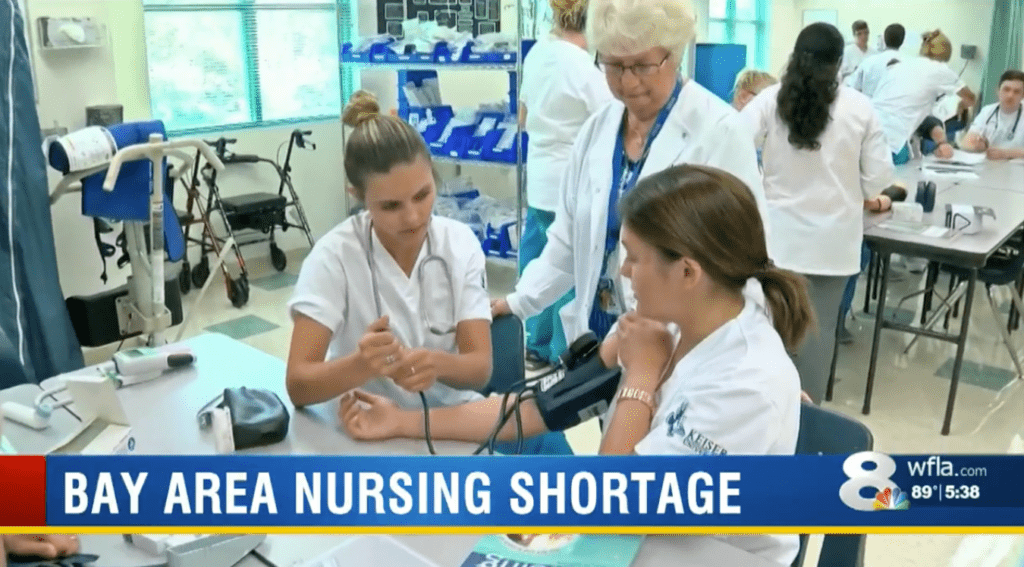 “By 2025, experts anticipate the Tampa Bay area will face a severe shortage of skilled nurses with Bachelor’s degrees and if it’s not addressed soon, it could cripple the state’s health care system.

The shortage can be attributed to baby boomers, retiring nurses and the growing population.

Experts worry the Tampa Bay area could see more crowded emergency rooms, more medical errors, and increased mortality rates.  Nurses would be expected to work long hours under stressful conditions, which could result in fatigue, injury and job satisfaction, according to Schumacher Clinical Partners Providers, a company that helps hospitals and providers with patient care.

Keiser University, a local university incorporating SNAC initiatives highlighted on WTSP Channel 10: There is a national shortage of trained nurses, and Keiser University is working to train more. Watch: https://www.wtsp.com/video/news/local/sarasota-school-aims-to-ease-nursing-shortage/67-8122923

“It’s National Nurses Week. A Gallup poll recently ranked nursing the most trusted profession for the 16th consecutive year. Yet, there aren’t enough nurses to go around.

The Suncoast Nursing Action Coalition held an event Wednesday in Sarasota, at which they discussed measures to combat a serious shortage of nurses that’s impacting hospitals and nursing schools in Southwest Florida and across the nation.

The coalition’s founder, Jan Mauck, recently retired from Sarasota Memorial Hospital after 41 years. Mauck joins Gulf Coast Live to share about some of the group’s efforts to combat the issue. …”

Aspiring nurses who want to earn a bachelor’s degree — now considered the minimum standard for careers in high-technology medical environments — now have a second local option.

State College of Florida has offered a pathway to the degree to nearly 1,000 nursing students in this area, and will add to its program soon with an accelerated curriculum called “BSN in Four.” And on Thursday, administrators at the University of South Florida Sarasota-Manatee officially realized the long-held dream of offering its local track to a bachelor of science in nursing. This fall, the school will enroll its first freshman class in a two-year pre-nursing curriculum, with the final two years of study expected to be in place by the fall of 2020.

The goal is to have 50 nursing students in each class, and applicants who live in this region and plan to work here will be given priority. This will elevate the quality of health care locally, Holbrook explained: While the Institute of Medicine has concluded that at least 80 percent of nurses should have a college degree by 2020, only 33.5 percent of nurses in this region meet that standard today. Research has shown that a more educated nursing workforce correlates to decreased mortality and complication rates, and fewer hospital-acquired infections and re-admissions.

Brought to you by Rough & Ready Media